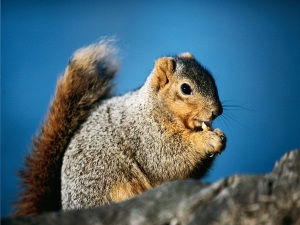 I believe that anybody and anything can teach me something. I believe I can learn from everything in my environment. Sometimes it is nature and the animals that are my greatest teachers.

I was sitting in the kitchen one day observing activities outside my window. My wife is an avid gardener, so in front of me were many varieties of flowering plants. There were xenias, Echinacea, sunflowers, roses and many others; a botanical garden that held my attention. There were hummingbirds darting back and forth to my delight. In the center of the garden was a small tree from which she hung one of her bird feeders.

A curious sight developed in front of me. A squirrel came by to feed or to see the new contraption. Did someone think this device would keep him from the food? The squirrel jumped on the tree, climbed to the limb from which the bird feeder hung and climbed down the chain to the top of the dome. When he reached the dome he fell quickly to the ground. The look on his face as he frantically tried to grab something to hold onto was priceless. He fell to the ground quickly. He looked at the new feeder as if to say, “What happened?” He seemed to love a challenge. He dusted himself off to try again. He tried several more times to master the bird feeder, but with the same result, landing flat on his feet and disappointed on the ground. I felt my wife had made the right decision on this new bird feeder. The frustrated squirrel stared at the bird feeder, as if to study it. If I didn’t know better, I would think he was trying to figure out the best approach. Squirrels have a reputation as creative thinking creatures; causing havoc in many locations.

Finally, he climbed the tree, as he had before, with the same determination. This time, I paid attention to the pink ribbon my wife had placed on the top of the bird feeder to make it look attractive. The squirrel lowered himself slowly down the chain, as he had done before. This time, however, he stopped at the pink ribbon. What came next stunned me. He slowly pushed his tail through the bow, she had meticulously tied. He locked his tail in the loop of the bow, anchored himself and slowly slid over the side of the dome, until he was perched over the feeding tray. There he hung upside down helping himself to the food that was denied him. It was a marvel to behold.

I called my wife and told her what had happened. She was upset. She muttered something about false advertising. She immediately packed up the bird feeder and took it back to the garden store. The bird feeder was squirrel resistant, but not squirrel proof. I tried to persuade her to just remove the ribbon, but that was not enough. The squirrel proof claim had already become null and void for her.

If animals can face a problem and use instinct or ingenuity to arrive at a solution, what can we do, since we are the wisest of all creatures on the planet? We could say it was an accident and the squirrel was lucky. However, the truth still stands, it solved a problem. If we review all available options, we find that the squirrel when faced with a problem was:

We told this story to our real estate agent and she told a similar story. Apparently, a client placed oil on a bird feeder to keep the squirrels away. The squirrels would slide off the feeder. However, one squirrel was seen rolling in the dirt until he was covered with a mixture of oil and dirt. The dirt enabled him to get traction so that he could hold onto the feeder and not slide off. This seems like a calculated, reasoned approach to solving a problem. She was able to get the food without slipping off and falling to the ground.

When we lived in Ohio, my wife had her signature garden again. Her problem with squirrels was their aggressive nature around her sunflowers. They would take the seeds from the sunflowers. She collected the sunflower seeds for planting and eating. There was one sunflower that was her pride and joy. It literally had a 12 inch head. She decided the cover the head of her largest sunflower with a plastic bag before we went to church to prevent the squirrels from stealing the seeds. When we returned from church, there was no trace of the sunflower head. It had apparently been chewed off at the base and dragged away. Well that’s the story we tell, and we have no reason or evidence to think anyone climbed the fence to destroy this one sunflower, but our usual suspects, our fine furry little friends.

Do not underestimate the creativity of a determined animal. We should not underestimate our ingenuity when passionate about a cause and resilient in our methods. So the question remains, “Are you smarter than a squirrel?”