The question was posed the other day, as it is everyday in corporations around the world. The question relates to Upper Management’s awareness or lack of awareness of a manager viewed as menacing by their people. The essence of the question is why doesn’t Senior Management come to the rescue? Surely, they know what the manager is doing to them. Their cries for help are going unanswered. What is the solution to the problem? This manager is killing them.

Employees want to believe their top leaders have their best interests at heart. They believe in the corporate vision, mission, values and beliefs messages. Therefore, a manager behaving badly and acting outside of these creeds cannot be sanctioned by the company. The manager must be successful in keeping their crimes a secret from those above them. Otherwise, they would have been dealt with long ago.

The problems usually surfaces when there is a relatively new manager. The person wants to make a name for themselves and prove they were the right selection for the job. In their zeal, they overstep their bounds, step on some toes and walk on people in achieving results. They also may become;

Many managers may not receive proper training and coaching in leadership and team development. They are essentially thrown into the turbulent waters and told to swim. When they have caused a morale catastrophe, early intervention may enhance their chances of success and rectify initial interpersonal mistakes.

There is also the reality that in many instances a new manager is brought in as a turnaround specialist. They will knowingly inflict pain or discomfort, make the tough personnel decisions, in order to boost productivity, remove ineffective employees and literally transform the department.

Employees are facing four possible positions that Senior Management may hold, which will influence their response to problems with direct supervisors.  They are outlined in Figure 1.  The Awareness and Compassion Grid

Figure 1.  The Awareness and Compassion Grid 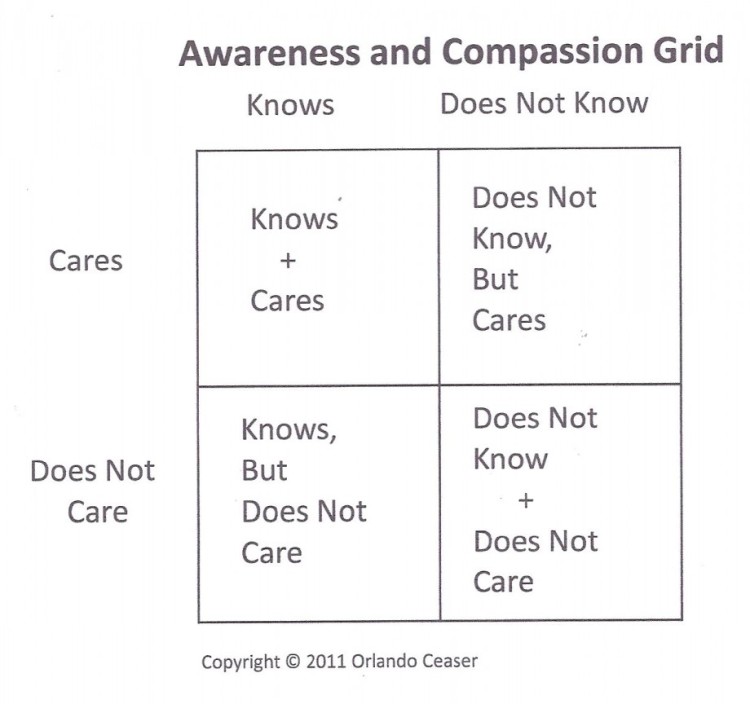 Senior Managers who are highly skilled and in tune with their environment, receive feedback on their managers. Employee surveys, an open culture, town hall meetings and other forums enable them to capture information on employees and their corporate culture. They readily communicate that they want to know and show they care for their people. This sentiment generates feelings of trust, engagement, loyalty and hope. It says Senior Management is cognizant of what is going on and may be in the process of taking action.

Managerial mismanagement or misconduct is brought to their attention. Since they placed the person in power they have to be delicate and deliberate in managing the situation. The assumption is they will do something about it. They will investigate all grievances and complaints. The solution may involve conducting 360 degree feedback or climate studies, direct conference with the manager and possibly a meeting with the entire team. The manager will be replaced or retrained. Training is often prescribed with a coach assigned to work with them to improve their interpersonal skills.

Since they feel the leaders know and care, they will shortly communicate their actions or they will soon notice an unexplainable change in the manager’s behavior.Senior Management must act swiftly before the unit is decimated and morale, engagement and productivity experience a further decline. Highly regarded, recently promoted individuals can be salvaged and become strong leaders with proper direction and accountability. This initial glitch in their leadership performance can become a thing of the past.

Does not know, but cares

Senior Managers are sometimes shielded from problems in their organization. The manager and their sponsor may not disclose that a problem exists. If it is mentioned the blame in a unit or team is not placed on the manager’s style. The employees will be accused of an inability to adjust to someone who is trying to hold them accountable. When employees complain about their boss to that person’s supervisor, they may be penalized with more work or punishment.  Jack was such an employee. Whenever he complained about his new boss, to their supervisor, instead of relief the new boss would turn up the heat on him. This meant more assignments and negative attention that bordered on harassment. When this became known, other members of the team refused to come forward and remained silent.

The challenge in this situation is finding a person to serve as an ombudsman to listen to their cases and carry their complaints to someone in authority. Sometimes this involves contacting the Human Resources Department. They may launch a full investigation to see if there is any credence to the charges.  A strong HR Department will maintain the anonymity of the individuals in the complaint. A groundswell of employee dissatisfaction through complaints and resignation will get the attention of Upper Management. Hopefully, the problem can be addressed before it escalates to the level of a full-scale productivity meltdown.

Knows, but does not care

When it can be discerned or deduced that a company knows and does not care, the best employees may leave the organization. Employees are in for a rough ride, when the company leadership feels that employees should be glad to have a job in today’s climate and the manager was placed there to get them to do their best. The company reads the employee survey and view comments as the gripes of ungrateful employees who act out of entitlement. The surveys become an indictment against the employees and not the leadership practices. When surveys are taken, complaints made and letters written, and nothing happens, it feels like a cover-up. If the company goes on an explanation campaign giving their side of the story and nothing changes, this is a toxic situation. A company that allows this to happen does not deserve hardworking, talented and committed employees.

The situation is further complicated when Senior Management stands up and gives a vote of confidence for the very person who is causing the problems, employees know where they stand. They are powerless to make any changes. This leader is protected and will not be removed or trained. This is an indication that everyone must work their hardest and get results or they will be replaced.

Remember, silence may be due to the fact that a new manager is simply following orders. They were brought in to do the dirty work and clean house and get better results. Employees are close to the action and must search their souls to ensure the complaints are justified. Sometimes complaints emerge when a new manager has a different style from a predecessor.

Does not know and does not care

Lastly, there is the worst situation of all; where the company does not know and would not care if they knew. This organization gives all power to their managers and assumes they will fulfill their responsibilities. These organizations do not have systems in place to seriously evaluate their managers. If the systems are in place, they are a sham, for nothing corrective happens with the data when someone is out of line. They are absentee landlords who do not work to improve the environment for their employees.

Most managerial promotions are effective. However, there are mistakes made by putting someone in a job with the wrong temperament, lack of business acuity or deficient in other key competencies. When this happens there must be a structure or mechanism to intervene to take corrective measures. The culture and philosophy of the company will govern their response. This will allow employees to know where they stand by how they are being treated. The employees must decide to maintain their sanity, elevate engagement and increase productivity to achieve optimum performance

16 thoughts on “Is anybody out there? This manager is killing me?”