Rick was promised a promotion. His manager committed the cardinal sin of sharing classified information from recent talent discussions with upper management and human resources. His candidacy for a mid level leadership position was about to yield positive results. However, a new executive arrived from the overseas office and used his considerable influence to put his own person in the job. Rick was devastated to learn the position, he was promised, was going to another individual. His boss was placed in a precarious position. He was apologetic and felt guilty for delivering the premature verdict.

There were two lessons. One was the need to be silent when trusted with confidential information. The second involved what to do when immersed in guilt after the situation blows up in your face. What was his subordinate going to do?

Rick could not complain for this would involve throwing his boss under the bus. Knowing his boss felt guilty, he decided to be a good worker and not compromise his managers’ decision. He was confident that eventually he would be promoted and his boss was an ally who really felt bad about the situation. The boss felt guilty enough to do everything in his power to see that it never happened again. Rick made the most of the additional time in the job. H and is silence and work ethic qualified him for a new assignment. 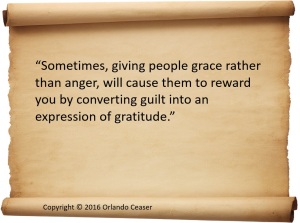 In another scenario, a merger placed a number of careers in shambles. The subsequent reorganization came with the requisite confusion and uncertainty. A few individuals who did not receive the promotions they desired were angry enough to express their discontent in a public forum and through the corporate grapevine. Their lack of good judgment and composure made a poor impression on the new managers. It gave valuable insight into their personalities and how they would respond in difficult times. Other individuals were also disappointed, but expressed their loyalty to the company, even though they may have been equally upset. They demonstrated wisdom by stating their disappointment only to their managers, while vowing to work harder for the next promotion. They were able to express their ambition, authenticity and transparency. This approach was appreciated and served as an example of managerial maturity.

Managers have a tendency to provide extra coaching to individuals they like. If they aren’t able to protect their people, they generally feel guilty about their inability to place them in the appropriate jobs at the appropriate time. If the company makes a decision that works against you, you may see it in your managers’ face, even if they don’t express their feelings outwardly. If they are genuinely contrite in a situation that worked against you, you may use that to set up a favorable situation down the road. The manager will appreciate your cooperation and understanding. They may internally feel as if they owe you something, when in reality they don’t.

In most situations, we don’t have very large career impacting decisions that people lose sleep over because they have a negative personal impact on your life. The more mundane instances are usually around appointments and not offering the support or resources necessary when you need them. When someone doesn’t come through as planned or promised, you want to acknowledge the breakdown. You want to gain an understanding that even if it was not intentional, steps will be taken to ensure that it doesn’t happen again. Actually, you’re asking them to do the best they can to help you. They may or may not verbalize this but you walk away with the general understanding of intent to work as your advocate. Let them off the hook and gain their commitment to come through for you in the future.

The style and grace that comes from patience and understanding the pressures on another person will be appreciated in the long run. The guilt issue may be a minor one, but it can be used in your favor.

As stated earlier, guilt is usually accumulated in everyday situations. Can you think of a time when someone may not come through as planned or promised? Anticipate the event and plan your response. Give them some grace, a way out and a show of support, which may pay dividends. They will seek ways to reward you in the future for your understanding and cooperation.

Additionally, can you think of the time when someone was late for an appointment or missed one altogether? How did they respond? Did you sense, there tardiness for the meeting or otherwise falling short of expectations was something that made them feel guilty. People have reputations around punctuality and your forgiveness will go a long way to making them feel remorseful and appreciative

We must acknowledge those individuals who exert a total disregard for you, as it relates to your time, resources and career. They are chronically late for appointments. They will make decisions that hinder your effectiveness and will not apologize when they let you down or stab you in the back. Using guilt in a situation where no one feels remorse is a classic waste of time. You should be very careful around these individuals and cast a large safety network of trusted individuals who will let you know when they are working against you.

When working with individuals who do not respect your time, resources and career, you must be careful not to use the same tactic with them, especially if they outrank you. Your reputation, business acumen and social skills should inspire you to continue to lead by example. Your goal is to achieve results and make others better by becoming a highly effective leader.

In summary, if someone fails in their interactions with you and are genuinely contrite, rather than lashing out in anger and causing irreparable damage to your relationship, you may consider being patient. Your show of grace will benefit you because it has an uncanny way of magnifying guilt. The trick is how to use this to your advantage without an overriding feeling of manipulation.

You may inadvertently or intentionally benefit from their feeling of guilt down the road. You’ll also find that grace will convert guilt into an expression of gratitude. This state of gratitude may have profound implications on your effectiveness as a leader who achieves outstanding results.