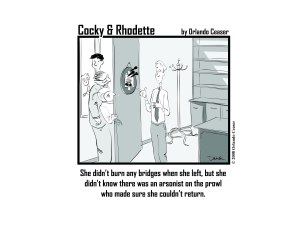 One of the hardest words of advice to accept is to take the high road. Someone has wronged you, you are deeply upset, angry, yet someone tries to talk you out of revenge.” You don’t want to burn any bridges,” they also might add to their words of wisdom. You pause for a moment, take a deep breath and realize they are telling the truth. You remember people who sabotaged their own careers to get back at someone. One manager was relentless in his pursuit of a former employee whom he felt did not deserve her job. He stepped over the line in slandering her and was demoted.

Employees are sometimes convinced that the company made a mistake when they hired or promoted someone or when they acted unjustly against them. They wanted to force the company to admit their mistake. In reality, the organization rarely admits questionable decisions due to an error in judgment.
When a person is hired or promoted and you disagree with the decision, there is a strategy you should implement. Additionally, in most infractions on the job, revenge is not advisable. You must receive satisfaction in knowing that justice will prevail, even though you may not be the instrument of that justice. It is best to help the person succeed and recruit them as an advocate. This is otherwise known as, taking the high road.

Don’t pass up a golden opportunity to take the high road, which is often the only productive path available. The high road must be taken, not necessarily out of nobility, but as a strategic element in career survival and growth.

The high road has several advantages. By its very name and nature, it is elevated above the fray, transcending the nonsense and is moving in a positive direction. It has positive visibility and magnetically attracts people to you. When you take the high road there are people in your corner sympathetic to your position. They are your advocate’s. When someone is promoted over you, the high road is lined with people giving you words of encouragement.

If you choose an alternative route, such as driving of the person from your organization; when the person quits, they will confirm your role in undermining their success. This cannot be good for you. You have cost the company money, resources, time and reputation. This will work against your being promoted anytime in the near future. You have effectively elected to burn bridges. If you thought the person leaving the organization would work to your benefit, you are sadly mistaken. Your actions will expose you as not being a team player, petty, jealous and not worthy of a leadership position. Rarely does a person who orchestrated a mutiny or underground dissension get rewarded. That is one of the unwritten rules.

You will be further away from your job with a bad mark against your name. You would have succeeded in poisoning the minds of other employees, which is not the sign of someone considered as management or leadership material. Your worst case scenario is further complicated by resigning from the organization and launching a negative PR campaign. This version of burning bridges can also be, counterproductive. Whereas you may look like a martyr, you are once again viewed as petty, jealous and unworthy of a leadership position.

The road to leadership can be very complicated. There are events along the pathway which stimulate positive and negative emotions within you. Your instinct may say to the strike out against a person or institution for revenge, justice or personal satisfaction. However it is often prudent to suppress these emotions. When you are standing at a fork in the road and one of the branches is elevated and the other is the low road, choose wisely. We are in a world filled with connections and interdependence; burning a bridge may seem like a good idea in the moment, but you may ultimately want to go back down that path. The high road has been proven to be the most judicious route for maintaining your dignity and reaching your destiny.