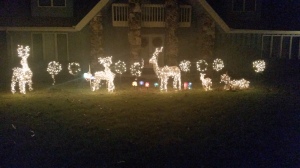 We are often started with the commercialization of Christmas. We are reminded to not lose sight of the reason for the season. This is valuable advice for Christians and others during this reverent time of year.

We grew up with Gene Autry Christmas classic of Rudolph the red nosed reindeer. It is a delightful song, but also delivers a powerful message about encountering and handling differences. This song could start meaningful conversations about accepting others.

The song begins with a reference to the reindeer popularized in Clement Clarke Moore’s, “The night before Christmas”, also known as “A visit from St. Nicholas.” It begins with a roll call of Santa Claus’ reindeer that of course omits the name of Rudolph. As you recall, Rudolph was different from the other reindeer because of the luminescent quality of his nose. His nose was so shiny that it had either reflective qualities or it glowed like a light. This was enough to make him the object of ridicule and ultimately ostracism by the other reindeer.

This lack of acceptance is seen when children and adults are confronted with someone who is different from them. Our initial response is to make fun of the person and then to isolate them because of their characteristics, traits, heredity or idiosyncrasies. Many of us recall when we were young and begged for approval. Even to this day, there is something about us that makes us stand out from the crowd and the crowd lets us know it.

At work or is school, simply being the new person, the new kid on the block, the person who is an unknown, becomes a source for teasing or isolation. We often wondered,” if they would only get to know me, they would see that I’m just like them. “Rudolph was a reindeer, so he surely had a similar appearance, except for his nasal peculiarity. But suppose he was of a different color, from a different region of the country or had a different ability.  He would have manifested a difference that would have caused him difficulty until he was accepted. We usually ask the different party to fit in, when the real focus should be on them being accepted by the group.

Bullying is also a response shown toward those who are different. The song the does not indicate that Rudolph was bullied, but we can only assume that preventing him from “playing in any reindeer games” was not always accomplished in the most delicate manner.

The song does not tell us what Santa Claus was doing during the hazing or if he even knew about it. But, as a good leader, he engineered a very strategic response. He knew the talent and value of all of his reindeer. He evaluated the weather system for his next journey and realized he was going to encounter numerous blizzards. He knew that the solution to his problem existed among the ranks of his reindeer. He knew he had one reindeer that could help navigate the wintry delivery of toys to boys and girls around the world. This opportunity would be well received it if every reindeer benefited from his gift.

We can give Santa credit for waiting for the appropriate time to unveil strategy. He could have given the reindeer the opportunity to work it out amongst themselves, as so many people do in similar situations. They say such things as,” kids are just being kids, learning to navigate difficult situations will only make the recipient stronger and teach them valuable life skills and that which does not kill them will make them stronger, to paraphrase Friedrich Nietzsche the philosopher. Maybe the reindeer performed similar initiation rites to others in the group that had other distinctions from their peers. Maybe they solve their treatment of Rudolph as being harmless and natural.

The defining moment came,” one foggy Christmas Eve, Santa came to say: Rudolph with your nose so bright, won’t you guide my sleigh tonight?” Many managers, leaders and parents look for the opportune moment to use the skills of their people. The right moment to show the world and the individual, that they recognize their true value and wish to share this value with every member on the team. We can only assume that in the fictitious conversation, Santa’s encouraged Rudolph and told him about the value of his difference. He made him feel that he was something special and should never feel that he was not important and did not have a place. I’m sure he made him feel like an important member of the team. He validated his value by asking him to lead the team by moving up to the front of the line.

You remember the happy ending to the song. “Then all the reindeer loved him, as they shouted out with glee, Rudolph the red nosed reindeer, you’ll go down in history! We know that in real life, responses to differences may not always lead to a happy ending. Sometimes the individuals have lingering insecurity, damage to their self-esteem and underlying resentment from the initial exclusion. But, so often when the difference that is ridiculed or denied is used for the benefit of the group, the organization, institution, group or community becomes stronger. The people learn a valuable lesson about inclusion. We are hopeful that when the person is accepted they don’t become complicit and act in the same manner when they encounter other people who are different.

If we remember the Rudolph days of our lives and commit ourselves to prevent them from happening to others, we will maximize their future contributions to our teams, families, organizations and communities. We will perform a noble act when leading by example with the lessons learned from Rudolph the red-nose reindeer.

Please look forward to reading more about differences in my new book due by June 2016, Unlock Your Diversity Greatness. It is based on the premise that your uniqueness is not a weakness and contains strategies to utilize your talents, skills and abilities. More books in the Unlock Your Leadership Greatness series can be found at www.OrlandoCeaser.com or www.amazon.com.