Corporations are communities of citizens who are ideally committed to a common vision. They are able hopefully resilient, with the capacity to withstand change, reinvent themselves and introduce new business paradigms, in order to succeed. These companies are survivors. They truly represent the “survival of the fittest” mentality. Corporations are staffed with individuals who have the survived a myriad of corporate reorganizations, growth spurts and culture adjustments. They have demonstrated the ability to adapt to change by adopting techniques necessary to avoid extinction.

Cockroaches and rodents have existed on this planet for millions of years. Cockroaches have been around an estimated 240 million years and rodents were probably chasing them for a good number of those years. They are truly survivors, exhibiting adaptive behaviors that have enabled them to adjust to changing circumstances.

The personification of these two characters is in the form of a cockroach named Cocky and a rodent known as Rhodette. They represent and will articulate the thoughts and feelings of employees in Corporate America. They will speak through reenacting scenarios that happen every day in some company around the world.

Cocky is a male and Rhodette is female. They are co-workers. Their biographies speak to their diversity. They manifest their diversity in many ways, such as gender, thinking styles, age, genus, species, educational levels and introversion versus extroversion, to name a few distinctions. Cocky learned business from his father Coach (co is from cockroach and ach is from roach), whereas Rhodette received her business acumen from her mother Rhoda. Cocky and Rhodette are close friends who spend many hours talking about business and comparing and despairing over the current environment in their company where the emphasis on production has a few casualties among the rank and file. They have revised their personal strategies for growing their careers. They speak for the masses although they also, have leadership responsibilities.

Cocky does not totally live up to his name. Whereas, he is self confident, he is also quiet and introspective; a true introvert. He knows when to keep his mouth shut. He may appear to be low key, but this is an adaptive quality, survival tactic. He can be commanding, when necessary. He will frequently sit in meetings and speak only when he has something significant to say. He is appalled by the amount of hot air released in meetings, as people speak to hear themselves talk. He is also disappointed when management condones and rewards this type of behavior. He sees his role as a pioneer to help others to adjust to corporate life. He has been promoted numerous times based on his productivity and the support of advocates, coaches and mentors. He says he is a realist, who fears he will go only as far as the company will let him. He is ambitious and has no desire to leave the organization.

Rhodette is flashy, extroverted and her electric personality makes her the major energy source in any gathering of employees. She can seemingly get away with outrageous statements. She is a strategic thinker and her mind and forceful presentation demeanor are threatening to others. She is aware that she has to be careful in how and when she states her views. She has been coached on her need to increase her self- awareness. She is a team player and her actions are usually to benefit the company or her teammates, not to acquire power, stroke her ego or build a fiefdom. She is a great sounding board for Cocky and their interactions are insightful and at times hilarious. They look out for each other and provide constant feedback, which helps them grow personally. Through their networks they are also able to gather information on internal competitors who may try to undermine their performance and career growth.

Cocky and Rhodette are both managers in a large corporation but their escapades and situations are found in smaller organizations. Their poignant comments and witty observations are thought provoking with educational lessons for everyone. They have coaches and mentors to assist them in their development. They are also connected with many employees within the company to help them report accurately on performance and levels of engagement. 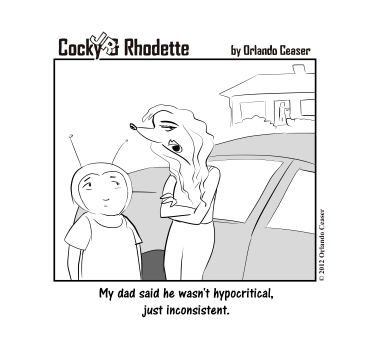 Cocky and Rhodette have given birth to a new creation, Cocky, Jr. The perspectives of teenagers are expressed through the eyes of Cocky, Jr. and Rhodesia. They are hilariously representing thought-provoking issues experienced by teenagers and the adults who interact with them.